Our soles are made of PU (Polyurethane soles) in order to be anti-slip, anti-static and oil/acid resistant.

Because PU has organic origins, it is biodegradable over time.

In a society where increasing attention is being focused on protecting our fragile environment, many progressive companies are insisting that, as far as possible, consumables such as safety footwear conform to environmentally sound specifications. The process of biodegradation is slow, taking place over many years, ultimately rendering the polyurethane to a number of benign compounds.

However, to ensure the longevity of the footwear it needs to be stored in the correct conditions. If left in an unventilated area for between 12 and 24 months (or longer), the soles will go through a process called Hydrolysis in which the plasticizer (which makes the soles flexible) leaves the sole, and the soles becomes very soft, then brittle, and begin to crack and break into small pieces.

Hydrolysis is a double decomposition reaction, with water as one of the reactants. Simply put, the oxygen atom in water bonds with the carbon atom of the esters in the polyurethane. This carbon – oxygen bond is unstable, and eventually also breaks down, leading to the gradual disintegration of the polyurethane.

Hydrolysis in safety footwear only becomes a serious issue when four factors combine to create the ideal environment:

Therefore, lengthy storage (longer than two years) in a hot and humid climate is potentially the perfect catalyst for hydrolysis.

New polyurethane formulations and the addition of more sophisticated chemicals significantly retard the process of hydrolysis, but following a few simple steps can almost eliminate it entirely:

The effects of Hydrolysis cannot be seen as a fault, but simply a characteristic of the compounds used to create the soles.

However, if warn regularly and the shoes are then in fresh air, warmth and sunlight the product will not experience this process. In fact, the shoes should then last for many years. Boots of 4 to 5 years old are quite commonly seen in good condition when maintained and polished regularly.

We have printed the warning regarding Hydrolysis on the fabric insert inside the box, to make end users aware of it.

Contact the team today to get advice on the perfect fitting safety shoe – info@profitfootwear.co.za or give us a call on +27 11 892 8030 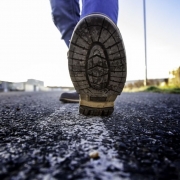 ProFit Safety Footwear: Taking the nasty out of cheap